When Penny Wellman’s father gets a promotion, the family move into Corbie House, a Victorian mansion. The owners were trying to sell for a while so it is cheaper than expected. On the first day exploring a crow flies at Penny from out of the attic. Penny begins to get a creepy feeling about the house. Later while they are unpacking her mother’s ornaments fall down from cabinet, her parents initially blame Penny although she tells them she was not in the room at the time they still seem suspicious. In another room Penny hears some strange noises and is pushed in closet, she has to break herself out but again her parents don’t believe her version of events. Her mother asks if she is unhappy in the house and says she will settle when she makes new friends. Soon after Penny does make a potential friend, Tina, but while visiting Tina gets spooked by breathing noises and laughter that sound like they are coming from the wall. She believes Penny was playing tricks on her. 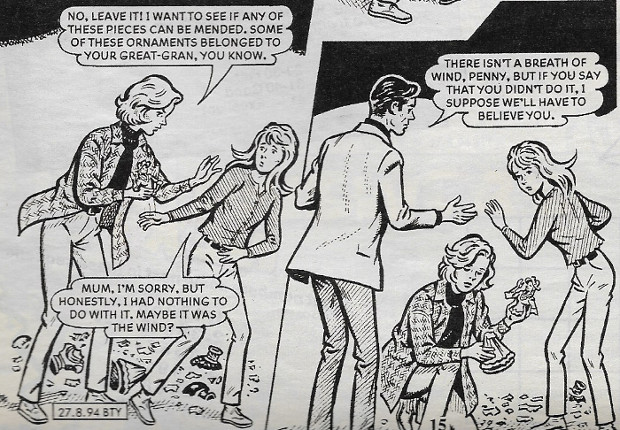 At school Penny is more fortunate when she makes a friend Emma, who mentions there were strange stories about Corbie house, but then she clams up. Mrs Wellman finds an old portrait of girl Penny’s age that looks similar to her and hangs it in the hallway. It creeps Penny out, and when Emma’s mom is visiting it seems the portrait tells her she is not welcome in house. Of course the adults again think that it is Penny that said these things, but Emma believes her. When mom’s old friend, Anne, a ghost story novelist, comes to stay she thinks she may have another ally, but it turns out Anne doesn’t believe on any of the things she writes about. The ghost continues to get stronger, playing tricks and destroying things and during a costume party the ghost actually appears causing a girl, Abbie, to fall through glass door. Lucky she’s not injured. The ghost appears to just Penny mocking her, she disappears before her mom arrives and Penny knows she will have to figure out how to get rid of ghost herself because no-one else will believe her.

When she meets an old lady, Mrs Scott, she tells her that her grandmother used to work in the house. The Halstow’s had two children a girl Charity, and a boy who died young. Apparently Charity was sweet when she was little but then grew up evil, Mrs Scott says there was some big fire at the house but hasn’t any more details. Penny exploring the attic for answers comes across Charity’s diary, the ghost appears as she she doesn’t want Penny to have it. Penny runs but falls through some rotten floorboards and ends up in hospital. Luckily she is not badly injured and while in hospital she can read the diary in peace. She finds out that Charity’s young brother, Tom, while playing climbed out on the roof and slipped. Charity tried to save him but a blackbird startled causing her let go of Tom’s hand. She was blamed for his death, ans she thought Corbie House hated her and she had plan to get rid of unlucky house. The journal stops there but presumably her plan was to burn it down, Penny later finds out there was fire at house and the family moved to village, but Charity died of fever soon after. Penny contacts the producer of TV series “Injustice” that tells stories of wrongly accused people, in the hopes they can clear Charity’s name and put her spirit to rest. When they agree to come film, Penny explains her research to her parents. While getting some shots on the roof, the cameraman slips but feels someone pulls him back and he regains his balance. Afterwards Penny is no longer is haunted and house once more is happy. Penny has new friends and it seems Charity is now at peace.

In these stories the minute you hang up a creepy old portrait you find in the attic trouble is going to follow! Although the haunting starts before the portrait is hanging Charity does get stronger once it’s up.  Of course typically everything that goes wrong, the parents blame their daughter and don’t trust her when she tries to defend herself. Some very familiar themes in this story!

Before Charity appears it is unclear what is causing the trouble, it is interesting that we find out later that Charity thinks the house is bad luck after her brother died, as  now she is the one making that come true. The motivation for her haunting is a little unclear, is she just trying to make sure no one lives in the house that caused her so much trouble or is there a vicious streak in her? She certainly seems gleeful of the trouble she causes at times and says the house is trying to stop her. Most likely a combination of the two, she does believe the house is bad luck and wants it destroyed, but also with the people of her time blaming her for her brother’s death and calling her evil, she may now believe that they were right and plays the part. She was clearly disturbed by her brother’s death, and it is heavily implied that she tried to burn the house down afterwards. When Penny finds her diary Charity seems distressed and weaker, maybe she is ashamed of her past and thinks she is deserved to be called evil. Saving the cameraman and Penny defending her name appears to relieve the guilt Charity has and let her rest. 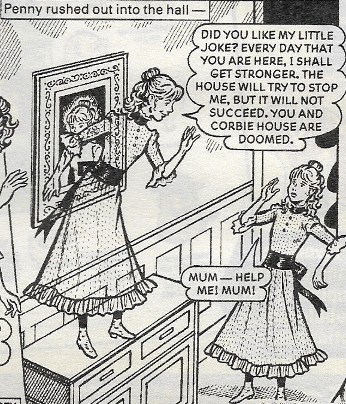 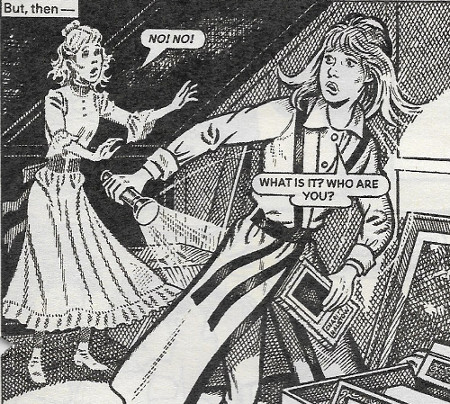 It’s surprising that Emma, who says she believes Penny and wants to be friends, doesn’t appear again, even if her mother won’t allow her to visit she could be someone to talk to at school. Instead Penny has to do things herself and no one defends her when things go wrong. The ending is wrapped up quickly, Penny decides to start investigation in the penultimate episode and meets Mrs Scott and finds the diary. The next episode (final part) she reads diary, gets film crew to visit and talks to her parents briefly (about Charity’s story not the haunting). It could be paced a bit better if there was an extra episode. Especially her parents after all the trouble happening being on board immediately for film crew coming to their house. Also a few times it seems like things are set up for one direction but then changes or never is developed, like Emma not helping more, or Charity saying the house was trying to stop her. Still a good little ghost story and nice art by Walker.