Tara couldn’t sing but was helping her sister Lyn, who needed to win six singing trophies before the end of the year, so she could inherit her late singing teacher’s country cottage for her family.

Holly Taylor was determined that her parents would win the Dunlow Loving Cup, an annual award made to the local couple who had not quarreled for a whole month prior to Dunlow feast day. Holly had a bet with snooty Cynthia Simpson and would lose her new bike to her, if Cynthia’s parents won.

Tired of having his wife and daughter arguing, Jill Owen’s father entered them in for a Home-Maker competition, and both of them made it to the finals. Jill felt she had to beat her mum or she would never live it down.

June Barker wanted to win a world cruise for her hard working mum by solving clues in a newspaper competition.

Sally Carson and three other girls are all in the finals for an under fourteen intelligence competition. The final competition is taking place in the remote Kellbeggan Study Centre. Sally meets the other competitors on the train to Kellbeggan, while two of the girls, Penny and Clare,  are friendly and excited about the trip, the other girl, Vera Pashal, is nervous and seems to be paranoid about being followed. When the girls get to Kellbeggan, they go to the local castle for a tour. When they sign the visitors book, suspiciously the guide gives a different pen to Vera, saying the other one has just run out of ink. Then, when they go into the dungeon, the lights go out and when they come back on Vera has disappeared! Penny and Clare think maybe she just slipped out the door, when the guide opened it, but then the guide denies that there was ever a fourth girl with them. Sally wants them to split up and search the castle but the guide says he is closing and hasn’t time to run after girls with wild imaginations. Sally thinks to check the visitors book to prove Vera was here, but is surprised to find her name isn’t there. Seeing no other choice they decide to head back to the study centre and alert Doctor Campion, who is running the competition.

But when they get back to the centre Dr Campion also denies Vera’s existence. Furthermore, checking their room, there is now only 3 beds and Vera’s suitcase is gone. Penny and Clare began to wonder, what reason would the nice Dr Campion have to lie to them and if they did imagine Vera. Sally points out the dents in the carpet, that show there was a fourth bed and the handkerchief that Vera gave her as proof of her being a real person. The girls sneak down to use the telephone to call for help, but find it locked. Dr Campion appears telling them it is only used for emergencies ad also gives them a warning not to meddle in things that don’t concern them. The next day is the girl’s first test to show their leadership qualities. Sally gets distracted from the test when she sees a groundskeeper, at first she thinks he may be able to help but then when she examines what he was burning, it appears to have been Vera’s suitcase.

Clare and Penny pass the test but Sally receives no points. Even though they are rivals Penny advises Sally to forget about Vera, at least until after the contest as there is nothing they can do anyway. But Sally is not giving up on Vera and continues to look for clues. She finds the castle now has a sign saying that it is private property, convincing her that Vera must be held there. For the next test, the girls are to get to the top of a hill and get a photo of a rock formation known as “the dragon’s chimney” and they will be timed on how long it takes. This time Sally does well on the test, as she actually takes time to look at map and find a footpath, while the others tackle the hill head on. When at the top Sally also realises they have a good view of the castle, she  sees two figures struggling nearby and she is sure one of them is Vera, she takes photos planning to enlarge them later.  When she does this she sees it is in fact Vera but when she gets back from fetching Penny and Clare, she finds the photos have been exposed and ruined. The girls are sick of Sally going on about Vera, but they at least now admit that she existed, but still say there must be a reasonable explanation for her disappearance like she was taken ill. Sally finds more clues as she discovers a pen of Dr Campion’s has disappearing ink, which she figures was used when Vera signed the visitors book. She also finds a newspaper saying that Vera is a diplomat’s daughter, which could be a reason why she might be kidnapped.

The next test is an assault course at Kellbeggan Barracks, Sally uses this as an opportunity to slip a message to a Major. Unfortunately, he mistakes her giving him the paper as something he can clean his pipe with and  with Dr Campion keeping a close eye Sally, she is unable to make another attempt. Still determined as ever Sally does track down Vera, locked in the castle, but she will need help to free her. Meanwhile Clare and Penny have been in the library, looking at a book about the castle. After reading about secret passages in the castle, they wonder if Sally was onto something, so when she arrives looking for help they go with her. Together the manage to free Vera, but have to hide from Dr Campoion and the others who are looking for them. Vera says she was held ransom because she is the daughter of a diplomat, but Sally still  has some questions, as she wonders why  her father would not send guards with her if he was worried about kidnap plot. Then more surprising is Vera reveals herself to Dr. Campion! It turns out the kidnapping was faked and that was the real Intelligence test. Vera, Dr Campion and the staff were all in on the test leaving clues and seeing if the girls would pick up on them and how they would react. Sally is the clear winner!

This is the first long post on this blog for a Suzy serial. Suzy ran for 249 issues from 1982 to 1987, which was quite a good run, but for some reason this comic is a lot rarer to find than others. A reason for this may be that compared to other girls DCT titles, it could be considered more like a magazine than a comic. It had glossy paper, was more feature heavy and (at least in the start) was focused more on photo stories than picture ones. It was certainly not a title I was familiar with, but having read some issues now, I think there are some good stories people are missing out on.

I quite like this story, it has a nice mystery with a good twist that Vera wasn’t actually kidnapped. Being only seven issues, the pace keeps things moving along nicely and with the competition and Sally searching for clues, there’s a lot going on to keep it interesting. The remote location also helps keeps things tense, as there doesn’t seem to be anyone for Sally to turn to for help, especially as the adults around her all seem to be in on the plot. Of course she is right that everyone is conspiring together, just not for the reason she thinks! It is certainly an interesting test, though not one you would be able to get away with these days, as you wouldn’t be able to justify putting teenagers under such a psychological ordeal!

I do wonder how Clare and Penny made it to the finals, as they certainly don’t seem too bright at times! They actually question if all three of them somehow hallucinated Vera, just because some “trustworthy” adults told them there was no other girl. Although this could be explained away as them just wanting to turn a blind eye to the strange occurrences, so it doesn’t get in the way of the competition, as later they do admit Vera existed. Still it is only when they find about the secret passages in the book they are reading that they actually take Sally seriously. Clare and Penny seem to be more selfishly concerned with the competition but they do come through in the end, helping Sally free Vera. They also show, that they at least want to win the competition fairly, advising Sally to forget about kidnap plots and not mess up her chances at winning. Sally is clearly deserving of her win, as she shows intelligence even in the fake tests, like studying the map before tackling the hill and of course more importantly finding the clues that lead her to Vera, which also shows her other worthy traits, compassion, perseverance and selflessness. 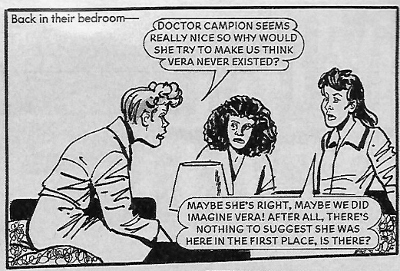 Simon Moffatt had been the youngest winner of an individual trophy at the “Horse of the Year” show back in 1964. He was dead now and his widow wanted their son Sam to follow in his footsteps, not seeing his twin Julie was the far more skilled rider.

Ten thousand pounds was needed to save the Wilkins’ family bakery from being closed down and reopened as Struttons video store. Tracy Wilkins planned to win the money by solving the clues of the Wealdland treasure trail.

Plain Jane Rose enters for a competition which has as its first prize; a holiday in Hawaii. That would be just right for Jane’s widowed mother who works very hard, pandering to the needs of her three other beautiful, but lazy, daughters.

Jean Greig a newcomer at Hartfield, Secondary Modern School, Mancaster, has helped the school to win a prized hockey trophy for the first time. It is games mistress Avis Hunter’s burning ambition to win more cups and trophies,and she makes the girls practise whenever possible. To get a break fromhockey, the girls also take up other activities.

Doreen, Beryl and Grace, three pupils of Tinhorn Park School, have entered a knock-out quiz contest organised by a news-paper. The girls hope to win the first prize of £1000 to prevent their small, private school being closed. Secretly, the deputy headmistress’s brother, Geoffrey Pickard, is plotting to get the school’s land as a factory site. Miss Pickard, who has been promised a good job in the factory, is determined to prevent the Quiz Kids winning the money. Having won the final of the Wessex area contest, the girls relax before the first round of the inter-county section by practising hockey on the morning of Parents’ Day. 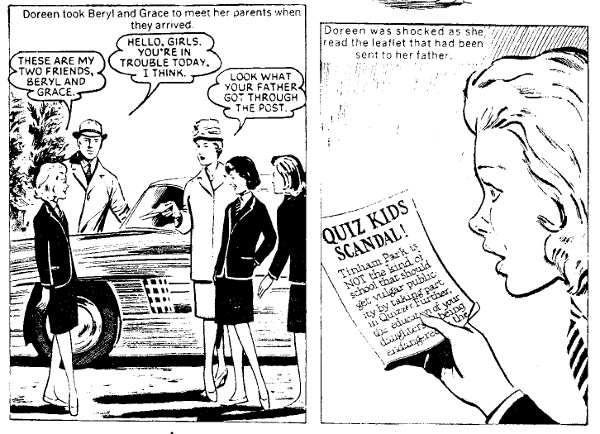