While on holiday Jenny Harris  and her brother Rex enter a mysterious cave, when Jenny speaks out of turn, Rex turns into a dog! He continues to turning from boy to dog while they try to figure out how to cure him.

While Rex solves his dog problem in a sequel  You Little Monkey! , Rex tries on a circus witch-doctor’s monkey mask. From then on he keeps turning into a chimp – usually at the worst possible times! 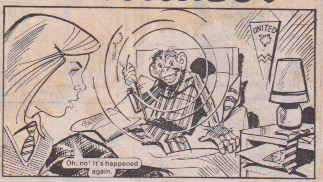