Plot
In the Bright household Dad is working overtime to save up for a washing machine. Mum decides to set about raising money to buy the family extras. The trouble is, she goes about it the wrong way. Instead of finding something she’s good at and developing it, she embarks on whatever scheme takes her fancy without proper research, thinking it through or considering if it is right for her. As a result Mum lands herself in a lot of scrapes and it’s up to her more sensible daughter Katie to sort them out.

First Mum sets up the garden shed for a mushroom farm. Katie is dubious because Mum has no experience in raising plants, but Mum expects such an abundance of mushrooms that she takes orders from greengrocers in advance. Talk about counting your chickens before they’re hatched: Mum’s mushroom crop is a complete failure, so Katie has to cover the orders with farm-bought mushrooms.

Soon after, the washing machine finally arrives. Mum seems to be doing more washing than usual. Oh dear, is she taking in laundry for another money-making scheme? That’s what people come to think. Katie and Dad are a bit surprised when people offer them loans because they think the Brights are hard up. No, it turns out Mum was doing the extra laundry as a favour for some neighbours when their laundrette was unavailable.

However, Mum still hasn’t learned her lesson from the mushroom failure. She is now inspired to make and sell machine-knitted woollies, despite Katie’s warnings that such things are made by full-time professionals. She does not heed Katie’s advice to develop dressmaking (which she is brilliant at) as a money-making venture either. Katie can only hope Mum knew what she was doing with the machine-knitting. But of course she didn’t. She ends up giving refunds and gives up the machine knitting promptly.

A luxury lampshade company advertises for at-home people to make up lampshades they are outsourcing. Katie and Dad flash it under Mum’s nose, figuring it is foolproof. However, it is too simple and Mum grows bored with it. When she asks for more interesting work, the company’s response is teddy bear patterned lampshades – and the teddies have been printed upside-down! The Brights are not sorry when the company decides to give up its outsourcing and keep things onsite. 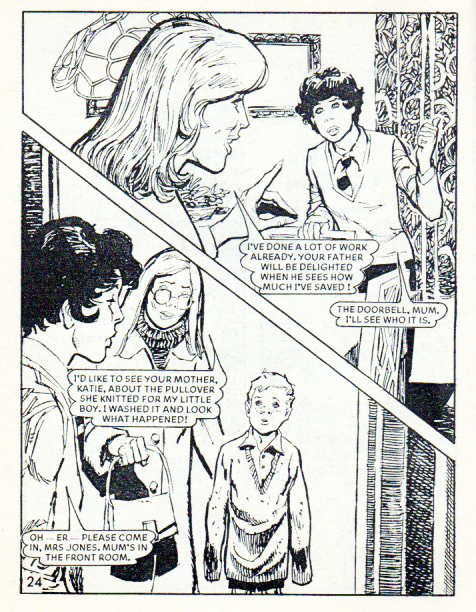 Next, Mum turns to weeding gardens although she is so clueless about gardening Dad won’t let her work in the garden unsupervised. She figures anyone can weed. She does not understand you have to know the difference between a weed and a plant. So when Katie goes to check on the gardens she finds Mum has pulled out some plants by mistake. She replants them, but it turns out she planted them in the wrong garden because Mum threw them on the wrong compost pile. Fortunately the clients see the funny side, but they will be getting others to do their gardens. Still, one of the clients agrees to let Mum walk her dog instead.

So now it’s dog walking to make money. It seems straightforward this time, but Mum’s big ideas overcomplicate it. She bites off more than she can chew when she takes on other dogs as well and has to walk six at once! Not surprisingly, it’s wearing her out. Then she gets locked in the park because of all those dogs. Katie manages to find her and rouse the Parkie to let her out.

On the way back from this latest scrap they find the school drama club store on fire. Thanks to them the fire is put out in good time, but the costumes for the upcoming school play are ruined. Mums are called upon to make up replacements. Katie thinks this should suit Mum well as she is so good at dressmaking. After some persuasion Mum agrees, if Katie will take over walking the dogs. Then Katie is asked to replace one of the actresses in the play, and soon finds walking six dogs while learning her lines is too much.

Fortunately Katie finds help in Ted Dawson, the brother of one of her classmates. Ted has no job, so he agrees to take over the dogs and receive the money while Katie learns her lines. Mum has no objections to the arrangement while she works on the costumes, but she will be taking the dogs over again eventually.

Then, just as the play is about to go on, the costumes get stolen. Mum put so much hard work into making them that the theft has her realise how much dressmaking means to her. Fortunately one of the new dogs Ted is walking is an ex-police dog. Ted uses him to sniff out the costumes, which got dumped in the old cottage at the back of the school. The costumes and play are saved.

Ted creates his own business walking dogs and Mum lets him keep walking her dogs. Word gets around about Mum’s work on the costumes and she soon finds herself with orders for more dresses. Now that Mum has finally settled upon a money-making scheme she can do right, Katie no longer needs to keep her right.

We now live in an age where work-from-home businesses have proliferated and work-from-home schemes are all over the Internet. So the concept of work from home in this story feels even more relevant now than it did when it was first published. Its message of exercising caution, proper research and good judgement in whatever you pursue to raise extra money is more acute now too, especially as there are so many scams out there and schemes where you earn very little money for a lot of hard work.

Fortunately Mum does not come up against any scams or underpaid work in this story. It’s just as well, because she is not exercising any serious research or thought into the various money-making schemes she tries out. Indeed, she does not give the impression she is showing much brains at all. It’s Katie who is showing the brains here. She can see the pitfalls Mum is creating for herself with her various schemes (for example, choosing ventures that she has no talent or experience for), which cause embarrassment and make her lose money instead of raising it. Katie can also see where Mum can really make money: dressmaking. It’s not just because Mum has the talent for it but also because there will be a niche for it as there are not many dressmakers in town. Yet Mum just won’t pursue dressmaking as a money-making business as she does not seem to have the interest. 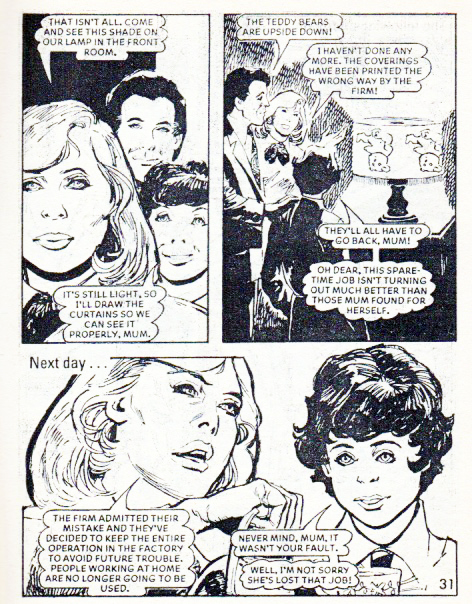 The story is not all about Mum’s money-making schemes. For example, the extra laundry Mum takes on is a favour, not a money-making scheme. And the focus of the story shifts more to Katie as she tries to walk the dogs while learning her lines. It makes the pace of the story more even, which is good. It also gives more leeway to developing other characters more, such as Ted Dawson.

Some good things do come out of Mum’s disasters. For example, if Mum and the dogs had not got locked in the park, she and Katie would not have seen the fire at school and raised the alarm in time. The damage would have been so much worse. Mum’s dog-walking also leads to the unemployed Ted Dawson to develop his own employment in walking dogs.

All the same, the consequences of Mum’s ill-conceived money-making schemes could have been worse if not for Katie helping to make everything right. It’s a relief all around when Katie no longer needs to keep her Mum right all the time.

Marion Trent lived happily with her grandmother, until she overheard a conversation between two doctors that her Gran only had 3 months to live. Marion vowed to make money anyway she could, even at the risk of being called mean, in order to take her Gran to London for the holiday the old lady always wanted.