Leanne Moore and her family have returned to Tresby for their holiday the year after their first visit. Leanne soon finds that there is something strange about Tresby; things that have happened before seem to be repeating over and over. And the Tresby poster warns that if anyone visits Tresby three times, they will stay there forever.

Eventually Leanne realises that this means anyone who visits Tresby three times will become trapped there, with everything repeating over and over. This happened to Dawn’s family next door, who just seem to be on one long holiday now and can’t remember living in Manchester until Leanne reminds them. She also finds Tresby does not appear on any maps from outside Tresby.

Leanne can’t convince her parents what she suspects about Tresby, but her brother Adam believes her because he has noticed similar things.

When the Moores go home, there is new hope that Dawn’s family might be able to break free of Tresby, as Dawn is now Nicky’s girlfriend, which did not happen before.

Next year the Moore parents discuss going back to Tresby for the family holiday. They get an emphatic “No chance!” from Leanne and Adam. 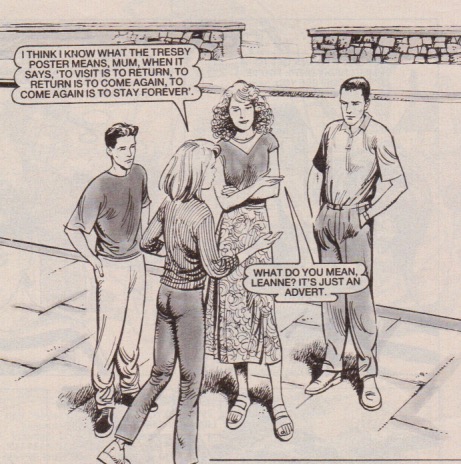