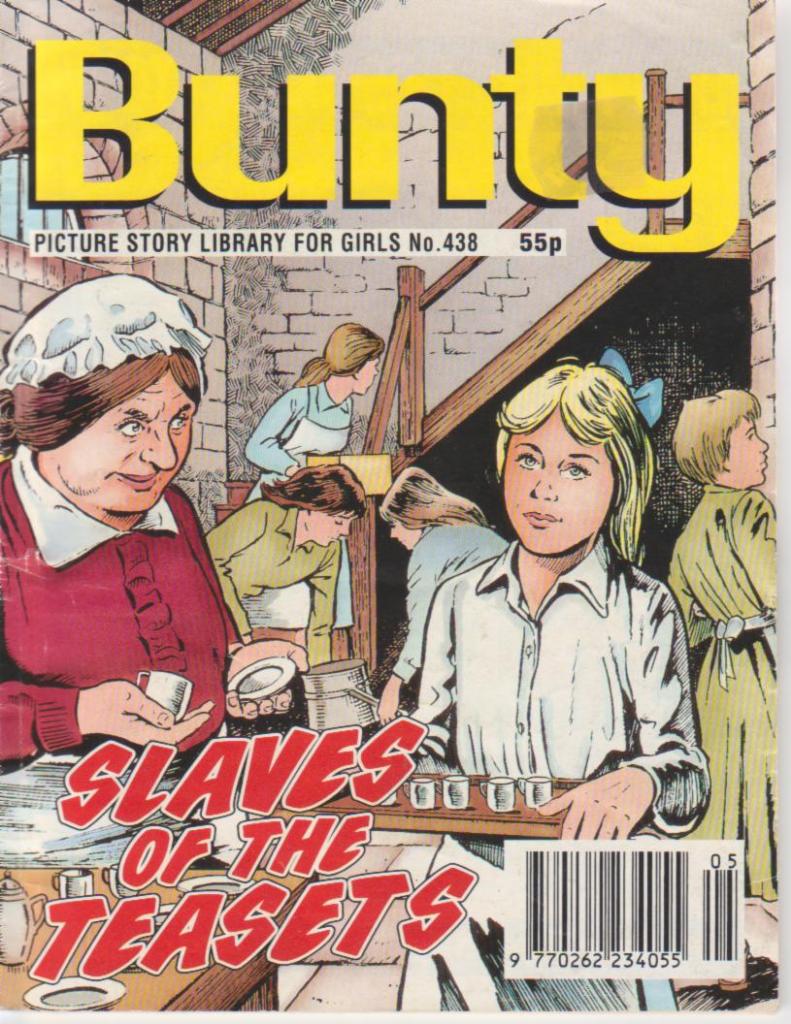 Plot
In Victorian times, Peg Ashton’s father has died owing rent, so the landlady throws Peg out. It looks like Peg has nowhere to go but the workhouse. But then she is picked up by Mrs Grimble, a sweet-talking lady who offers her “the daintiest job” in the world, which is making dolls’ teasets from pewter.

However, when they arrive at Mrs Grimble’s teaset factory, Peg begins to get warning signs that the job is not as dainty as Mrs Grimble depicts when she sees the place is infested by rats and hears someone say “old mouldy Grimble has found another fool to slave for her”. (“Old Mouldy” is the girls’ nickname for Mrs Grimble.) Reality becomes even more apparent when Peg sees how pale her fellow workers look, and the meals consist of very substandard and badly prepared food. To add insult to injury, the girls have to pay for the food out of their own wages. If they don’t have the money, they go without.

Peg soon finds out how unhealthy, gruelling and dangerous the working conditions really are in the “daintiest job in the world”: lack of ventilation; blistering heat for whoever operates the furnace; risk of injury from molten pewter; each girl having to make 2000 pieces in a day; no regulation on the long hours they work (no clocks to tell them when it’s time to stop); improper feeding and endless hunger; substandard bedding; picking pewter scrap out of rubbish tips; and, of course, the constant threat of lead poisoning. When a girl does get lead poisoning, which is called “the sickness”, Mrs Grimble does not bother to get any medical attention for her. Peg’s friend Tansy dies because of such neglect, but Mrs Grimble just blames Tansy for being such a weakling. She shows the same callousness when another girl, Sarah, gets her arm badly injured from the molten pewter, and fines Peg a penny when she steps in to help Sarah. Regardless, both infirm girls have to carry on working. Added to that is May Blossom, a worker who is Mrs Grimble’s toady and likes to bully the other girls. May takes a dislike to Peg, particularly after Peg tries to please Mrs Grimble so as not to lose too many wages for meals. May likes to cause trouble for Peg where possible.

At first Peg plans to seek work elsewhere when she saves some money. Then she decides to expose the working conditions instead. So when the King of Belagora visits Britain, his aide commissions Mrs Grimble to produce a dolls’ teaset for the king’s daughter, Princess Vesna. Peg seizes this opportunity to get a message out. She secretly stamps letters on the teaset cutlery to spell out “Princess help us poor pewter girls!”. Unfortunately, when Mrs Grimble catches Peg smuggling in medicine for Tansy’s lead poisoning, she does not allow Peg to finish the order. This means Peg can’t arrange the cutlery in the correct order for the letters, so the message gets jumbled.

After Tansy dies, Mrs Grimble advertises for a replacement. An applicant arrives, and Mrs Grimble gives her the same sales pitch about the job that she gave Peg. Peg offers what help she can to the new girl against Mrs Grimble and May Blossom. The girl also asks the others if teaset making is what they really want in life. This prompts several girls to express what they would really like to be, which includes being dairymaids and embroiderers.

Then, when May causes the girl to drop and damage a tool, Mrs Grimble threatens to beat the girl. Peg intervenes and a struggle ensues. Suddenly, the aide from Belagora appears, and tells Mrs Grimble that Peg just stopped her from striking Princess Vesna. Yes, the girl is none other than Princess Vesna! Princess Vesna found the odd letters and unscrambled the message. She came to the factory in order to go undercover and collect evidence on the working conditions. The aide orders the constables to arrest Mrs Grimble and May Blossom. Princess Vesna takes the girls to more wholesome jobs in Belagora where they can fulfil the career choices they expressed earlier. Peg herself becomes Princess Vesna’s lady-in-waiting.

This story brings attention to an aspect of Victorian times that was so pervasive – household products out of dangerous and poisonous substances. Goods containing lead, arsenic and other harmful elements (found in wallpaper, house paint, clothes and children’s toys to name but a few) permeated the Victorian home. Even where the dangers were known, manufacturers seemed to give little thought for the wellbeing of the higher-class people buying the products. So what thought would there have been for the low-class people who made them?

Perhaps the danger of the poison itself is the reason the teaset slavery is less sadistic and over the top than in other “slave stories” (stories where a girl or girls are slaves of a racket, prison or unpleasant business/institution). Sure, the working conditions are dangerous, gruelling, unhealthy and cruel. Yet we don’t see outright torture being inflicted on the girls or tortures being piled on one after the other on the protagonist, as has often been the case in so many other “slave stories”. Nor do they appear to be actual prisoners who are constantly finding a way to escape the factory, as they often are in similar stories. We never find out what the penalty is for not meeting the quota of 2000 pieces a day either, so it is a bit hard to gauge just how far the cruelty goes there. 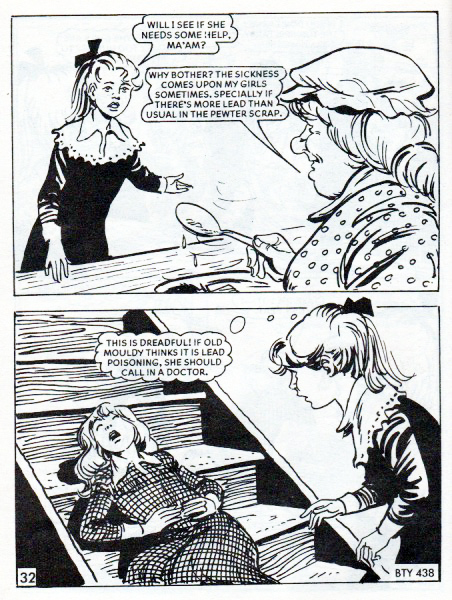 The relationship between Peg and Mrs Grimble never has the acrimony that most protagonists have towards the main slaver in “slave stories”. Usually the main villain develops a particular hatred towards the protagonist because she is a rebel who refuses to break and is determined to bring the slaver down. This is what drives the story until the protagonist finds a way to escape the slavery and raise help. However, although Peg does rebel (mainly in getting medicine for the sick and injured girls while Mrs Grimble does not even bother) and plots to get a message of help out, the story does not go in the usual direction of the protagonist being a constant thorn in the slaver’s side. Nor does Peg ever really incur any vicious, sadistic vengeance from Mrs Grimble for constant rebellion as a lot of protagonists in “slave stories” do. This makes a nice change from the usual slave story formula. The focus of the story is more on making a statement about appalling and often dangerous working conditions of Victorian times.

The animosity Peg encounters in the story comes more from May Blossom the toady than Mrs Grimble the slaver, which is unusual for this type of story. Just what May gets out of being the favourite is unclear as we never see her get any special privileges from Mrs Grimble. The only thing May ever really seems to get out of it is bullying the other girls – which is what puts her in prison alongside Mrs Grimble when the tables turn.

Mrs Grimble is one of the more intriguing and curious slavers in girls’ comics. There can be no doubt she has a heart of stone and cares little for the wellbeing of her workers. Yet she can be quite the charmer and sweet talker, and really knows how to sell the job to an unwary new girl before the girl discovers the reality. Even while the girls are working, Mrs Grimble speaks to them in an almost caring, motherly way instead of being cold and harsh. For example, when Peg goes out her way to be a model worker, Mrs Grimble praises her. Mrs Grimble’s appearance also lends itself to her mother figure; when we first see her she looks every inch a sweet, kind, motherly lady. When she gets riled, it looks almost out of character for her. However, we know that Mrs Grimble is just showing what she is really like underneath a mealy-mouthed façade of motherliness and kindness that makes your skin crawl.

The resolution is an impressive one. The prospective helper not only steps in for the rescue, but actually goes undercover to do it, and subjects herself to the same conditions and unpleasant people who run the teaset factory in order to gather enough evidence. Moreover, she is a princess who not only poses as a working class girl but also subjects herself to squalid and dangerous conditions of working and living in the pewter factory and virtually starving on substandard food. That must have been a particularly dreadful shock for a princess who had only known the lap of royal luxury, but she didn’t flinch from it.

The plotting is tight and well paced. It avoids several of the clichés that the slave story formula often follows, which is refreshing. It seems to prefer to let the working conditions and callousness of Mrs Grimble speak for themselves, and have the added threat of constantly working with a dangerous and poisonous substance take the place of over-the-top tortures that so many “slave stories” go in for. It’s also more realistic for the Victorian setting, as back then working with poisonous substances was all too common.