This month is the 100th anniversary of the Titanic sinking.  I’m sure  with all the books on the subject that have been released and James Cameron 1997 film Titanic is being re-released in 3D, that it has been pretty hard to miss. So with the month that is in it I thought it was a good time to look at the story “The Sailor Doll”.

The story is drawn by Peter Wilkes and is a mystery/ ghost story involving a girl Jackie and a sailor doll that was on the Titanic. Jackie is going on a school trip with her friends Donna and Fran, they are taking the cruise ship “Odin” to New York then onto Disneyland for a week.  It must be some fancy school school these girls went to, if they can afford a cruise ship to America and a week in Disneyland on top of it. I also wonder about the logistics of the trip so they get a ship to New York then do they fly to Disneyland, because presumably if it’s in California that’s a really long drive to take!

As a mascot Jackie’s father gets her a sailor doll named Sam from a junk shop. When they are sailing off Jackie nearly drops Sam into the water. It’s the first sign that there may be something strange going on.

In the standard procedure of these stories,  more strange things happen when the girls keep finding their porthole window open and Sam beside it. At first these things are dismissed and Jackie’s friends are particularly cynical that there is something unusual with Sam. Then Jackie has a nightmare in which she is drowning she also see a young girl in old-fashioned clothing, looking for Sam.  While she tries to forget these nightmares and just have fun, she starts to see visions during the daytime. 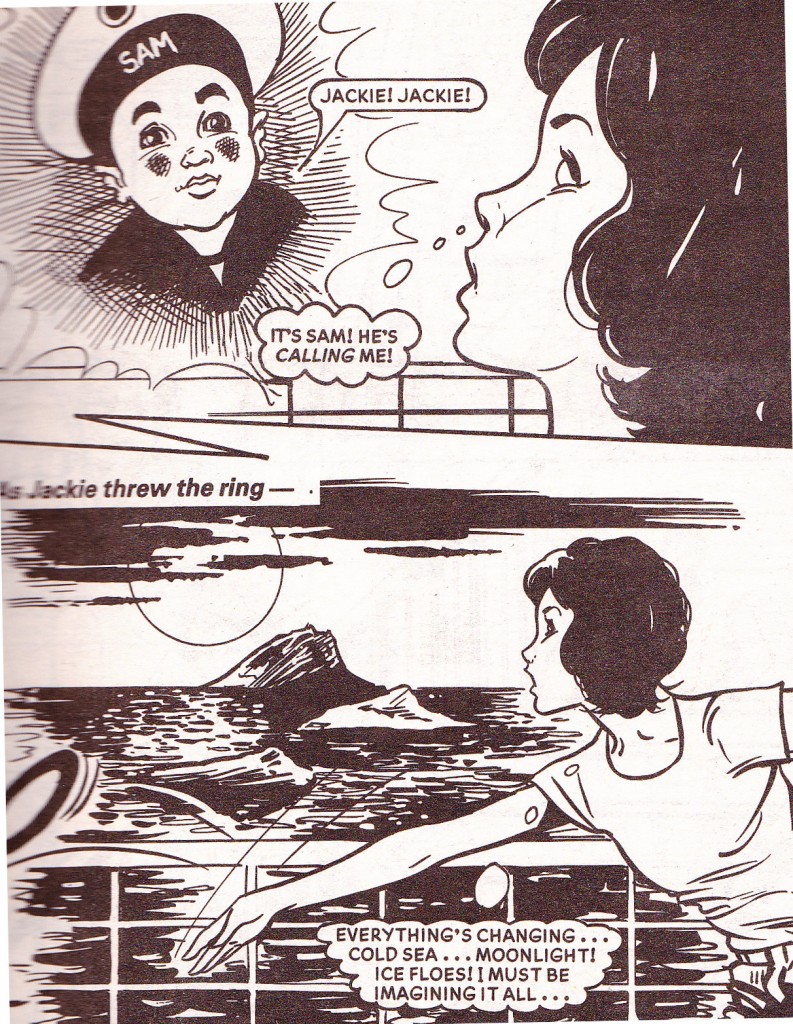 So the only reasonable theories Jackie can have is that she is hallucinating or that Sam is trying to tell her something. Later from a tear in his jacket she finds a note.  She can’t read all the note but she can make out the date of  April 1912 and words “exciting, cold and  big ship” also the name of the ship ends in ‘anic’.  So Jackie researches the information and finds out about the sinking of the Titanic. I would have thought this is something she would of heard of before in school at some point but apparently not. She notices that there are similarities between the Titanic and the trip they are on now, they are travelling the same course, between the same dates and their captain is also name Smith.

Jackie tries to convince her friends that there is a connection with their trip and the Titanic. When more strange things happen Fran and Donna agree to help investigate. Jackie sees the young girl again and falls down steps chasing after her, ending up with a concussion. Fran decides to throw Sam overboard thinking if he’s gone all the trouble may stop. Jackie is upset when she finds out this, she is also convinced their ship is going to sink as well and only Sam could have helped them. Not sure how Sam could have helped him but instead of finding Sam sinister and creepy, Jackie thinks he is a good spirit.

Luckily it turns out Sam fell onto a lower deck when Fran dropped him so Jackie finds him again. She figures that the girl would have been saved if she hadn’t gone back looking for the doll, while Sam was rescued from the water and now he wants to be reunited with the girl. The girls decide they need to toss Sam overboard on  April 14  at 11.46pm.

After this the ship arrives safely at its destination. Fran and Donna believe they let their imaginations run wild but Jackie believes Sam and the girl are happily reunited.

The story is quite a common one; strange occurrences, ghosts and cynical friends. It has the more accurate historical setting which is a bit more educational than the usual made up ghost history. A lot of these tortured ghosts were looking to be reunited with a beloved item, if there is a lesson to be learned I think its if your ship is sinking/house is on fire/school collapsing etc… do not go back for your favourite toy/ locket because you will be killed and end up haunting some girl 60 years later.

3 thoughts on “The Sailor Doll / Sam”